A soil map is a geographic representation of the variety of soil types and/or soil properties (soil pH, textures, organic matter, horizon depths, and so on) in a given area. Soil maps are often used in projects involving land assessment, spatial planning, agricultural extension, environmental protection, and others.

When rain falls over land, a portion of it runs off into stream channels and storm water systems while the remainder infiltrates into the soil or returns to the atmosphere directly through evaporation.

Physical properties of soil affect the rate at which water is absorbed, and the amount of runoff produced by a storm. The hydrologic soil group provides an index of the rate that water infiltrates a soil and functions as an input to rainfall-runoff models used to predict potential stream flow.

The Soil Maps command of CivilGEO’s software allows the user to display global or regional (United States, Canada, Africa, and Europe only) soil maps on the Map View.

To display the soil map on the Map View, select the Soil Maps menu item from the Map Data ribbon menu.

Note that the user needs to assign a coordinate reference system (CRS) to the project before assigning soil survey data. Based on the current CRS of the project, the corresponding region will be enabled.

The following countries are listed under the Soil Maps menu tab:

Clicking on any of the desired countries listed above will cause the software to display the Soil Maps dialog box. The user can click on the [OK] button to add the soil survey data layer of the selected region on the Map View. 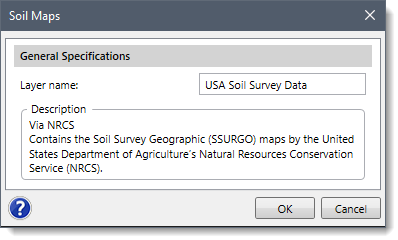 The Soil Maps command allows the user to download hydrologic soil groups as shapefile data. Refer to this article in our knowledge base to learn more about the NRCS Soil Survey Data Download command.