The Automated Draw Storage Areas command greatly simplifies the creation of storage areas (i.e., lakes and ponds) with the simple selection of a local depression area on a DEM terrain surface. The software will create a planar surface at the defined water surface elevation and then intersect it with the defined terrain surface. The resultant clipped polygon represents the storage area. 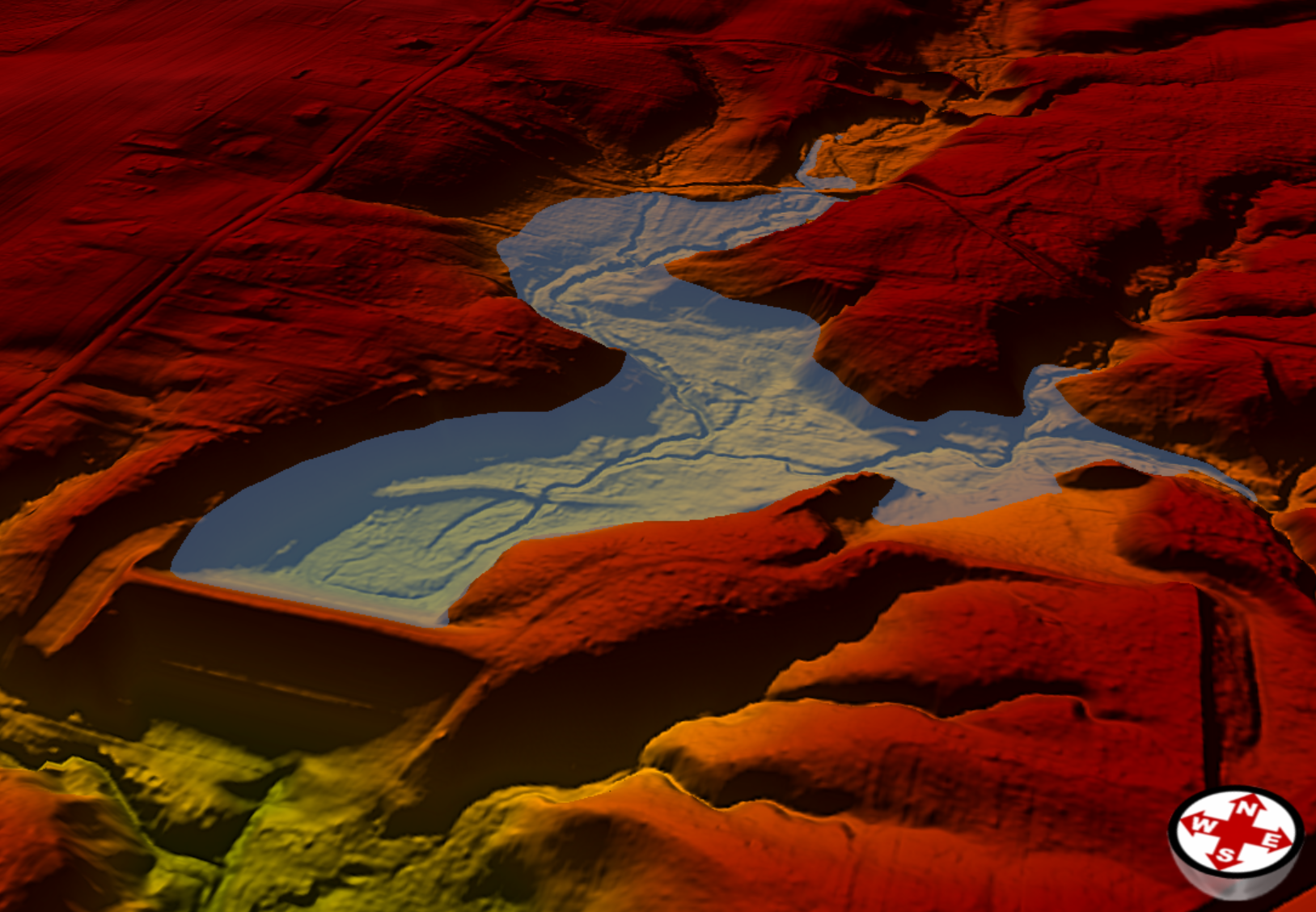 The Compute Critical Storm command allows the user to instantly go through several storm durations and frequencies for sizing a detention pond and for sizing and designing the corresponding outfall structure to accommodate the required design storms. The user simply defines the storm durations, storm frequencies, and corresponding rainfall distributions, and the software automatically looks up the corresponding rainfall and then executes simultaneous HEC-HMS simulations (one simulation per processor thread, two simulations per core) to determine which combination causes the worst case situation. In a matter of minutes, the user can redesign the detention pond for the worst case conditions.

Multiple scenarios can be run at the same time (i.e., existing conditions, proposed conditions, etc.). The results clearly show for each element within the model which storm duration and frequency creates the worst case conditions. The output can be easily exported to Microsoft Excel in a color coded table, making it easy to review the results.

The software also generates a standalone HEC-HMS model that reproduces the same results for purposes of agency review submittal. 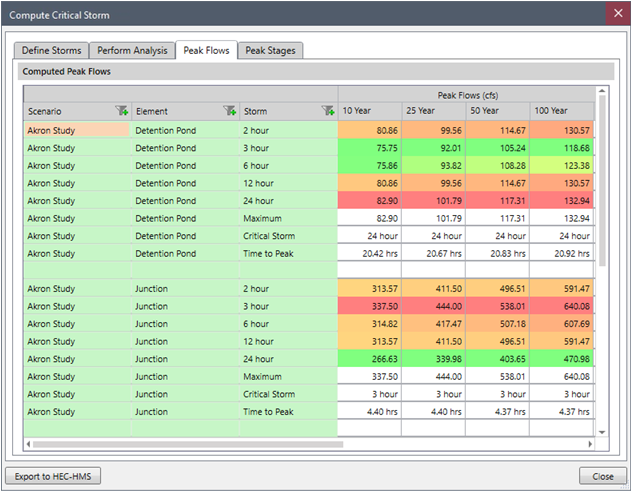 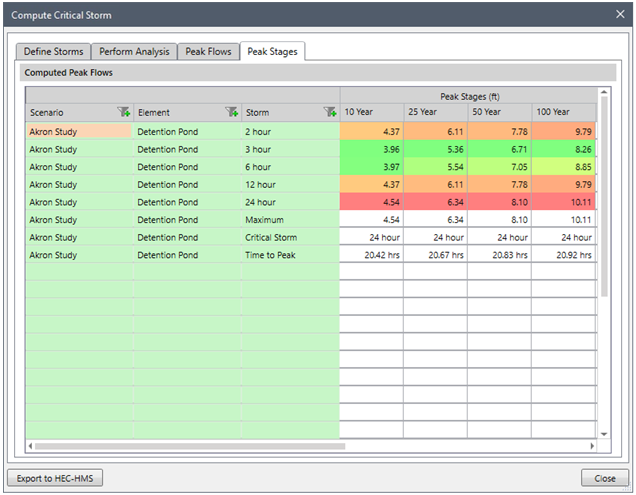 The Grid Calculator command can perform mathematical computations and logical operations to raster grids (i.e., elevation, water surface, velocity grids, etc.). For example, the user may want to see the difference in water surface elevations as an elevation difference grid by subtracting two elevation grids from each other. Or the user may want to create a “custom” flood hazard map by multiplying the flood depth grid by the velocity grid.

The command provides a very easy to use interface to walk the user through the process of computing raster grids without the need for any programming skill or knowledge. And, for power users, the software provides an expression editor where simple and complex expressions can be entered, validated, and computed on the selected raster grids. 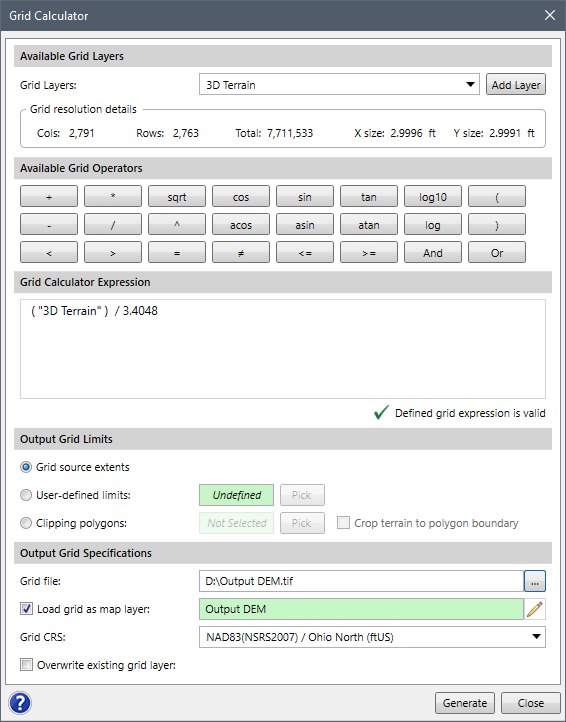 This command provides specialized capabilities for delineating the small catchment areas associated with urban streets and the corresponding catch basins. The user can define the roadway gutter, catch basins, street centerline or opposite roadside edge, and any contributing shoulder area. The software will then delineate the catchment areas. 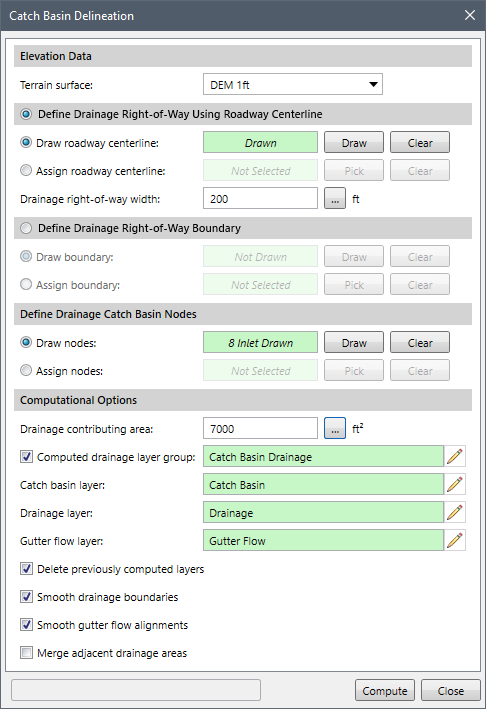 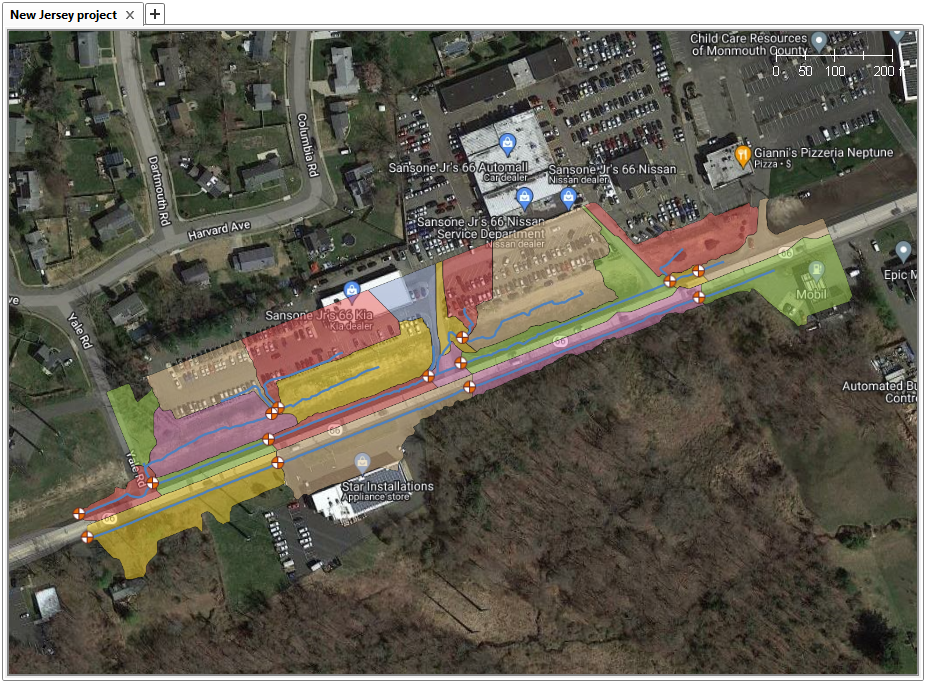 With this command, existing HydroCAD projects can be imported and analyzed using HEC-HMS. Some functionality, like Rational Method storms, are not supported.

This command allows you to use GeoHECHMS as a preprocessor for HydroCAD. Utilize GeoHECHMS to delineate the subbasins, determine the routing reaches, compute the hydrologic properties for each of the subbasins, size the detention ponds and then port the model over to HydroCAD.

Additional commands have been added to the Results ribbon menu and are designed to capture all or part of the Map View (in either 2D or 3D) and publish the images to a graphic file (i.e., PNG, JPG, TIFF, etc.), to a PDF, or create a flyby 2D/3D video movie. 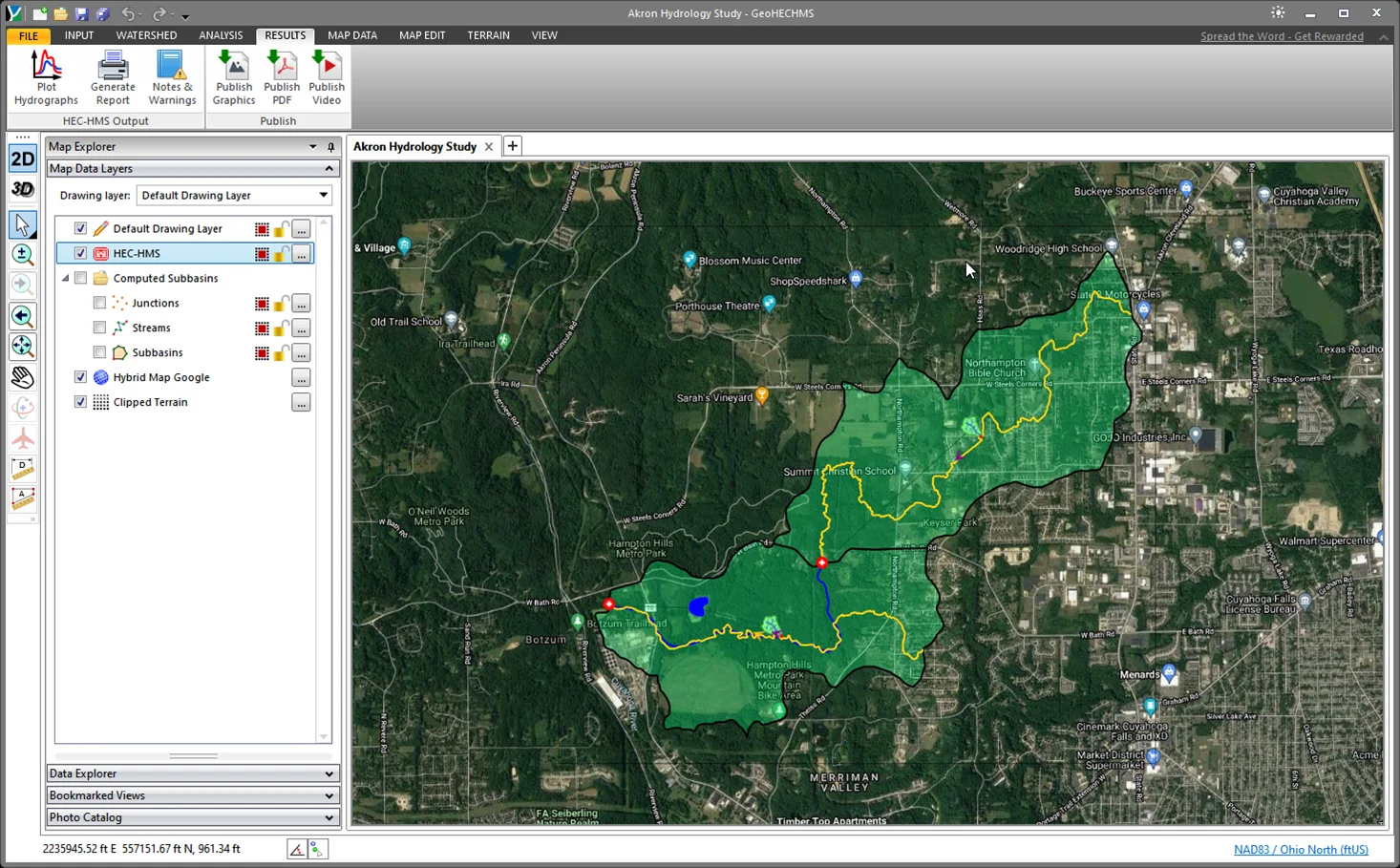 This command will export the HEC-HMS elements to an equivalent LandXML network model. This allows the defined routing reaches constructed of pipes and channels to be imported into AutoCAD Civil 3D and MicroStation as actual entity data. This command complements the existing Import Pipe Network command.

The United States and United Kingdom are two of the few places in the world that use a period to indicate the decimal place. Many other countries use a comma instead. Similarly, while the US and UK use a comma to separate groups of thousands, many other countries use a period instead. The software automatically recognizes what decimal and thousands separator format is in use for the default region/culture settings in Windows. All input data fields, output graphics, and output reports use the appropriate decimal and thousands separator format for the computer.

The flood maps from FEMA’s online web map services are unreliable and slow. As such, we have duplicated FEMA’s flood map GIS database on our own hosted web map service so that the flood maps are displayed more clearly and quickly. Our backend services team regularly updates the FEMA maps as changes are detected. 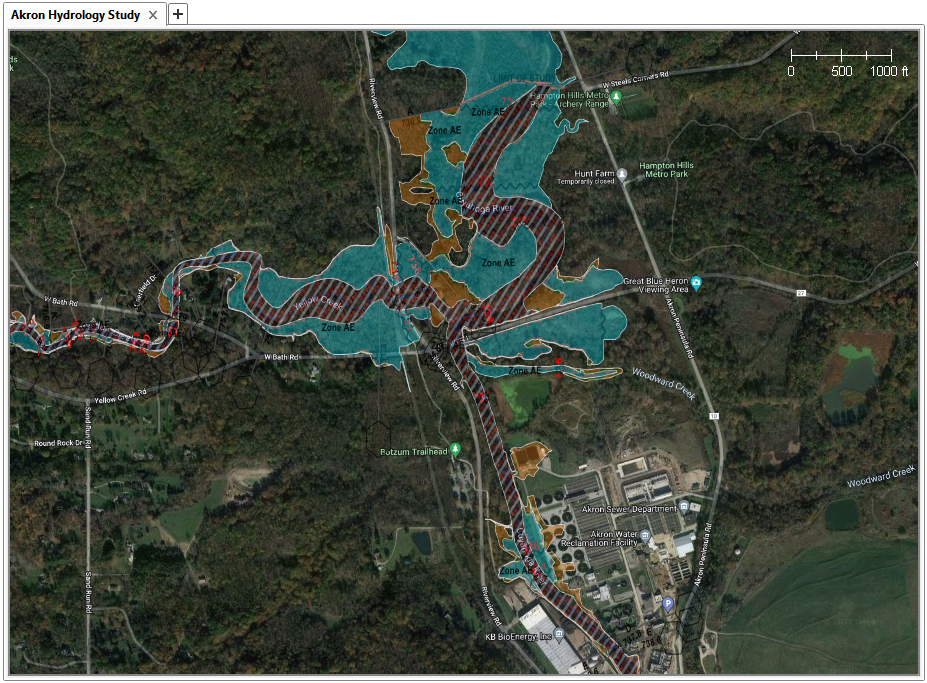 The Generate Report command fully supports customization of the template file. Placeholders for customizable sections exist to allow the user to create his own custom report. Foreign language support is now provided, allowing reports to be generated in other languages (i.e., French, German, Italian, Spanish, etc.).

The Diagram Editor in the Generate Report command now has additional text formatting commands, including:

The automatic placement of the subbasins in the Routing Diagram editor contained in the Generate Report dialog box has been improved. The software does a better job at trying to determine the correct location to place the subbasin element relative to the routing elements (i.e., reaches, junctions, storage areas, etc.).

The Find Address command now has a [Copy] command that will copy the retrieved address to the clipboard. 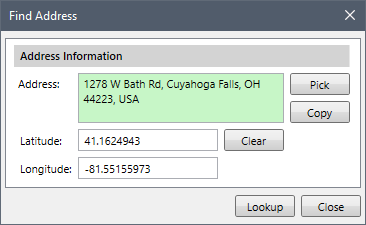 The Map View Scale Bar can now be changed to various styles. This improves the user’s ability to see the relative length of objects more clearly on the Map View.

The Time to Peak value has been added to the Data Summary Table contained in the Plot Hydrographs dialog box.

For HEC-HMS models that include subbasin base flow, the Subbasin Table Edit dialog box now includes all base flow parameters.

Additional export options have been provided to the Export HEC-HMS Project command, providing the user with more choices as to what should be included in the exported HEC-HMS project. 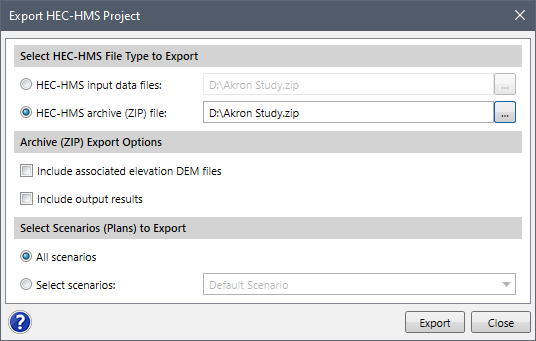 Several improvements have been made to the Recent Projects backstage page, including

When using the NLCD Percent Impervious web map service, the Compute % Impervious command incorrectly interpreted cells without any data (i.e., NODATA value) as the specified default impervious value (usually 20%). The correct value would be to interpret these cells as 0% impervious. Notice that the previous error led to a more conservative analysis (more runoff produced).

The Assign Subbasins command previously could not handle polylines that did not close. This has been corrected and the software can now remedy situations where there are small gaps between polyline end points. This same issue has been fixed in the Build Polygons command.

The process of adding new photos from external sources to the Photo Catalog was extremely slow. This has been greatly sped up.