Follow these steps to display the Merge DEMs command:

The following sections describe the Merge DEMs command and how to interact with the above dialog box. 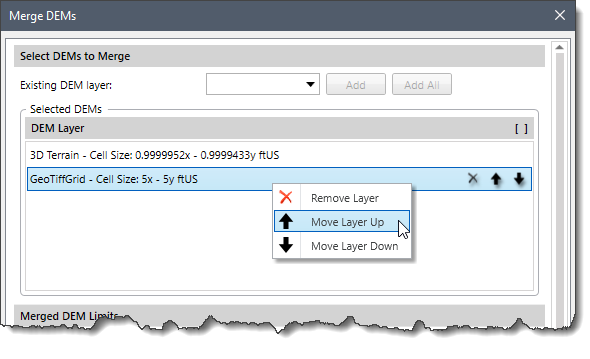 The following options are available to define the rectangular extents of the merged elevation grid:

This section allows the user to fill-in the small gaps between adjacent elevation grids by interpolating the elevations from the edge cells of each grid. By default, the Fill Small Gaps Between Grids checkbox is checked.

From the Maximum search distance entry field, the user can define the maximum search radius that will be used for gap filling. The spin control button can be used to define a threshold value between 1 to 50 cells. A gap that is farther away from any cell than this threshold value will remain unfilled.

The Smoothing iterations entry field allows the user to define the number of iterations that the software will perform for smoothing the filled gaps in the grid.

The user can select from two available options to define how the two surfaces should be merged when there is an overlapping space between terrain surfaces that are to be merged.

The following options are provided for the mosaic merge operation:

This section is used to define the specifications for the merged elevation grid. 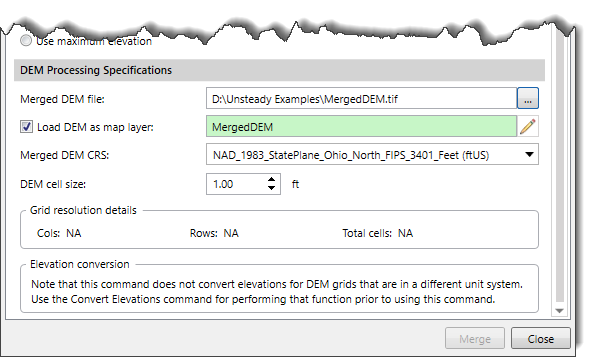 Click the […] button for the Merged DEM file entry to specify the file name and directory location for purposes of saving the merged elevation grid file.

By default, the Load DEM as map layer checkbox option is checked to load the merged elevation grid as a layer in the Map Data Layers panel. Click the pencil icon to rename the layer.

The user can select the CRS to be used for the merged elevation grid. If there is only one CRS in the project, the software automatically selects it.

The Merge DEMs command supports merging DEMs that have different coordinate reference systems (CRS). For example, the project might be in a State Plane CRS in US Survey Foot and the DEMs being merged might be in a geographic (lat-long) or metric CRS. The software will perform the necessary reprojections to align the selected DEMs so that they can be merged together.

After the options have been defined, click the [Merge] button and the software will merge the elevation grids into a new elevation grid file and, if desired by the user, load the grid layer in the Map Data Layers panel.