What are Curve Numbers?

A curve number (CN) is a hydrologic parameter used to describe the stormwater runoff potential for the drainage area. It is a function of land use, soil type, and soil moisture. The Natural Resources Conservation Service (NRCS) has divided soils into four hydrologic soil groups (i.e., A, B, C, and D) according to water’s ability to infiltrate. The curve number values range from approximately 30 (for permeable soils with high infiltration rates) to 100 (for water bodies, impervious surfaces, and soil near-zero infiltration rates).

In GeoHECHMS, the process of computing CN involves land use and soil types. Our software automates this process by using the following data:

For a watershed that consists of several soil types and land use, a composite CN is calculated as:

The Compute CN command is used to compute the curve number (CN) for each subbasin, which is used to determine how much runoff occurs based upon the Land Use (or Land Cover) and the underlying Hydrologic Soil Type. For example, urban areas where there is a lot of pavement and hard surfaces will generate significant runoff, regardless of the underlying hydrologic soil type. To learn more about curve number computation for urban areas, refer to this article in our knowledge base.

Wooded areas tend to absorb a lot of rainfall but produce very little runoff, unless the underlying hydrologic soil type cannot absorb the rainwater, such as hardpan clay soils. Therefore, the command will combine the two coverages (i.e., Land Use and Hydrologic Soil Type) and develop a representative curve number for each subbasin.

Follow the steps below to use the Compute CN command:

The following sections describe the Compute CN command and how to interact with the above dialog box.

This section includes a table that lists all the subbasins contained within the current scenario.

The user can select the subbasins for which the curve number value is to be computed. If a subbasin is already selected on the Map View prior to running this command, the same subbasin will be shown selected within the table.

Alternatively, the user can click the [Pick] button to interactively select the subbasins from the Map View. Clicking on the [Pick] button will cause the dialog box to temporarily disappear, allowing the user to select HEC-HMS subbasins from the Map View. Upon returning to the Compute CN dialog box, the total number of selected subbasins will be displayed in the Total selected read-only field as shown below. 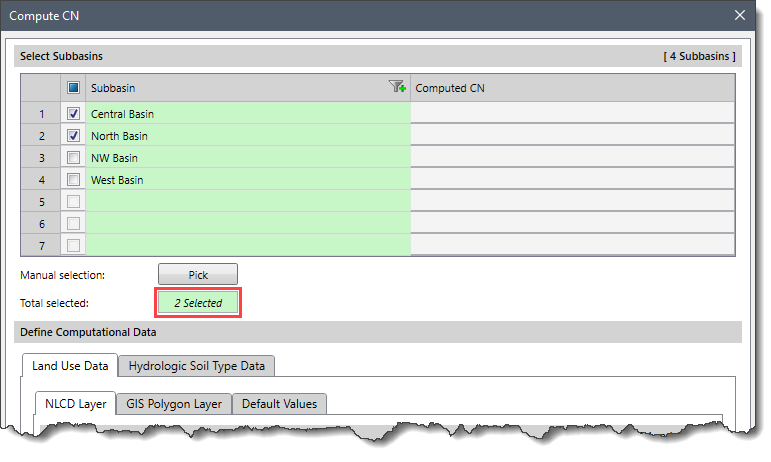 Note that the user can select multiple subbasins from the Map View prior to running the Compute CN command by holding the [Ctrl] key while selecting the desired subbasins.

The Define Compuational Data section contains two panels: Land Use Data and Hydrologic Soil Type Data. These panels are used to define the land cover data and hydrologic soil group data that will be used for computing the curve number for the selected subbasins.

The Land Use Data panel contains three subpanels, which are described below:

The NLCD Layer subpanel is used to determine land type with data from the National Land Cover Database (NLCD), which is represented by 75 ft cells throughout the USA. The NLCD map service is used to determine the curve number based upon the hydrologic soil group (i.e., A, B, C, D) as shown below. 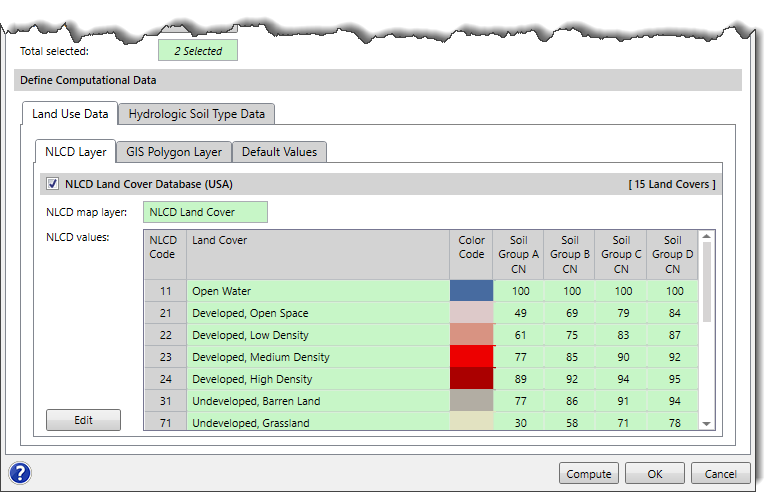 The user can click the [Edit] button to display the NLCD Land Cover dialog box that provides an editable data grid, allowing the user to change the CN values of different hydrologic soil groups. 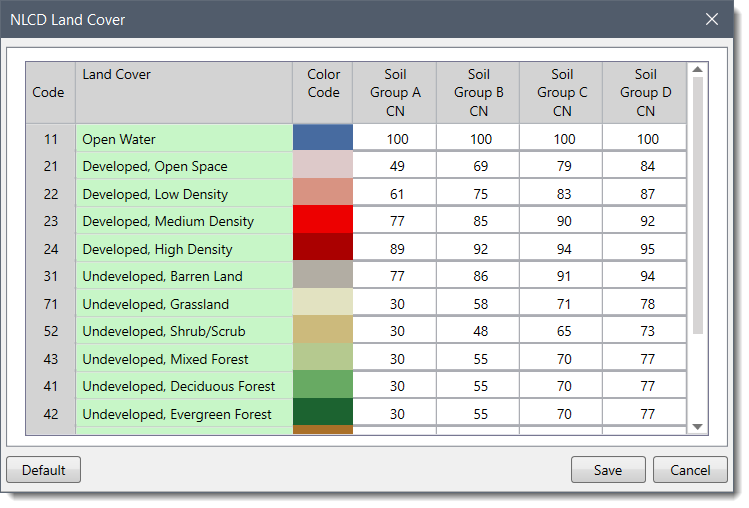 After editing the required cell values, the user can click the following buttons:

Note that the NLCD Layer subpanel will be replaced by other subpanels based on the modeling region. Currently, land cover data is available for the following regions: 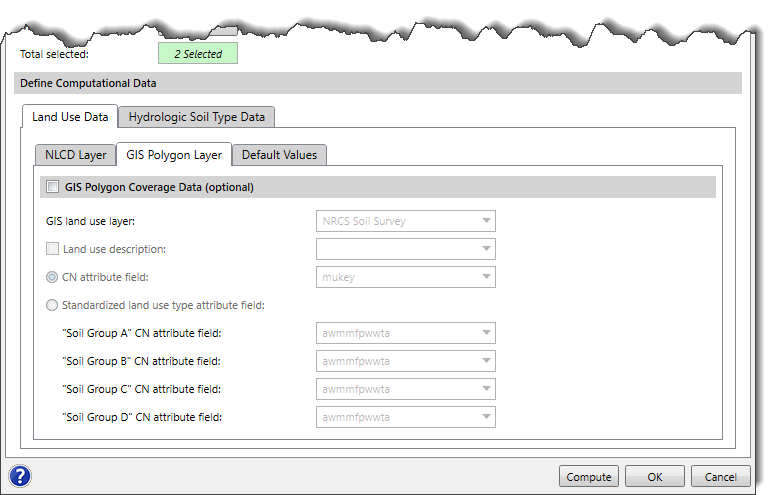 The Default Values subpanel is used to define the default CN value or standardized land use type for the software to cross-reference. The user can enter integer or float values into these default value fields. 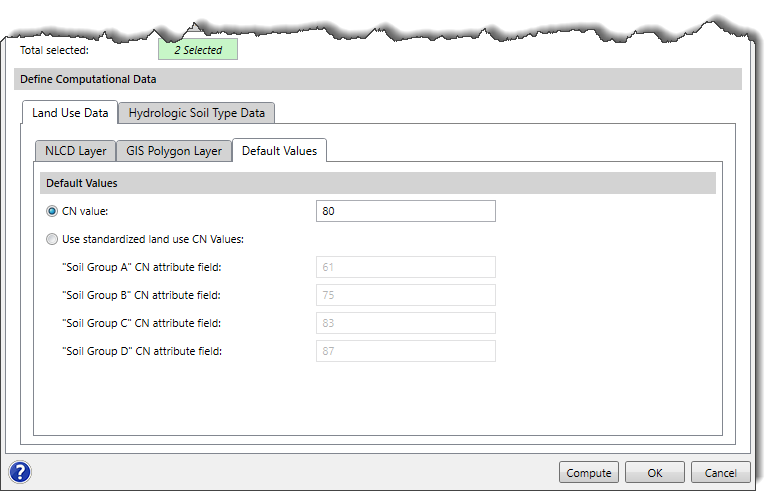 The Hydrologic Soil Type Data panel contains three subpanels, which are described below:

The NRCS Layer subpanel uses data from the NRCS Soil Survey Database to determine the hydrologic soil group data for the watershed region. 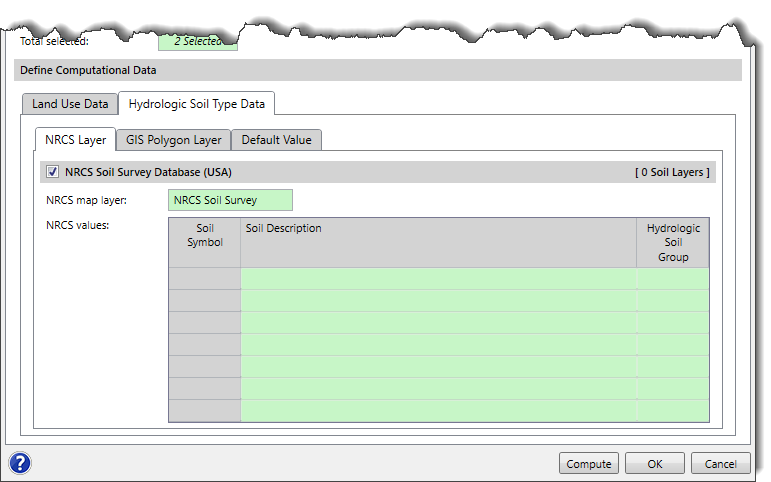 Note that if in GeoHECHMS a soil is assigned to a dual hydrologic group (A/D, B/D, or C/D), the first letter is for drained areas and the second is for undrained areas.

The NRCS Layer web soil survey database is only available within the USA and does not work outside the USA. This subpanel will be replaced by other subpanels based on the modeling region, as described below.

The Default Value subpanel is used to define a default hydrologic soil type for the software to cross-reference as shown below.

When the data has been defined in the Compute CN dialog box, click the [Compute] button. The software will then look at each selected subbasin and compute the curve number for each subbasin as shown below. 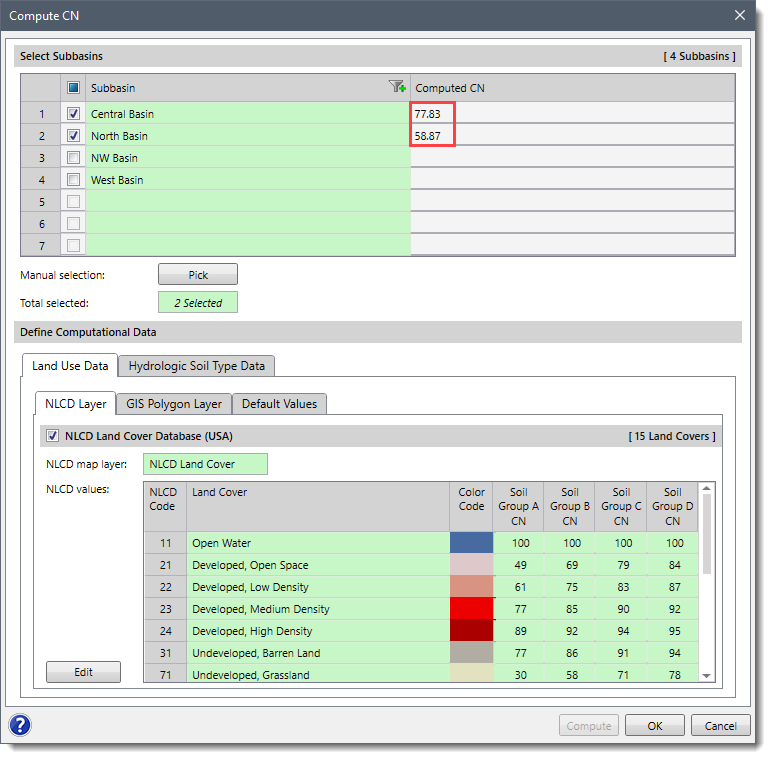